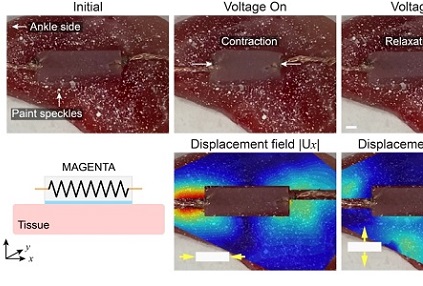 The MAGENTA device with its tough hydrogel adhesive surface (shown on the left) was implanted on a mouse’s calf muscle that in the atrophy model then was immobilized for a longer period of time to induce muscle wasting. Actuating the device by turning the electricity on lets it contract, generating mechanical stimulation to the underlying muscle, whereas turning the electricity off allows the device and muscle to relax (top row on the right). The panels on the bottom right show where muscle tissue is displaced as a result of contraction and relaxation of MAGENTA with a color shift from blue to red indicating displaced areas in muscle tissue. (Credit: Wyss Institute at Harvard University)

Muscles waste as a result of not being exercised enough, as happens quickly with a broken limb that has been immobilized in a cast, and more slowly in people reaching an advanced age. Muscle atrophy, how clinicians refer to the phenomenon, is also a debilitating symptom in patients suffering from neurological disorders, such as amyotrophic lateral sclerosis (ALS) and multiple sclerosis (MS), and can be a systemic response to various other diseases, including cancer and diabetes.

Mechanotherapy, a form of therapy given by manual or mechanical means, is thought to have broad potential for tissue repair. The best-known example is massage, which applies compressive stimulation to muscles for their relaxation. However, it has been much less clear whether stretching and contracting muscles by external means can also be an effective treatment. So far, two major challenges have prevented such studies: limited mechanical systems capable of evenly generating stretching and contraction forces along the length of muscles; and inefficient delivery of these mechanical stimuli to the surface and into the deeper layers of muscle tissue.

Now, bioengineers at the the Harvard John A. Paulson School of Engineering and Applied Sciences (SEAS) and the Wyss Institute for Biologically Inspired Engineering at Harvard University have developed a mechanically active adhesive named MAGENTA, which functions as a soft robotic device and solves this two-fold problem. In an animal model, MAGENTA successfully prevented, and supported the recovery from, muscle atrophy. The team's findings are published in Nature Materials.

"With MAGENTA, we developed a new integrated multi-component system for the mechanostimulation of muscle that can be directly placed on muscle tissue to trigger key molecular pathways for growth," said senior author David Mooney, Robert P. Pinkas Family Professor of Bioengineering at SEAS. "While the study provides first proof-of-concept that externally provided stretching and contraction movements can prevent atrophy in an animal model, we think that the device's core design can be broadly adapted to various disease settings where atrophy is a major issue." Mooney, a Wyss Founding Core Faculty member leads the Wyss Institute's Immuno-Materials Platform.

An adhesive that can make muscles move

One of MAGENTA's major components is an engineered spring made from nitinol, a type of metal known as shape memory alloy (SMA) that enables MAGENTA's rapid actuation when heated to a certain temperature. The researchers actuated the spring by electrically wiring it to a microprocessor unit that allows the frequency and duration of the stretching and contraction cycles to be programmed. The other components of MAGENTA are an elastomer matrix that forms the body of the device and insulates the heated SMA, and a "tough adhesive" that enables the device to be firmly adhered to muscle tissue. In this way, the device is aligned with the natural axis of muscle movement, transmitting the mechanical force generated by SMA deep into the muscle. Mooney's group is advancing MAGENTA, which stands for mechanically active gel-elastomer-nitinol tissue adhesive, as one of several Tough Gel Adhesives with functionalities tailored to various regenerative applications across multiple tissues.

After designing and assembling the MAGENTA device, the team tested its muscle deforming potential, first in isolated muscles ex vivo and then by implanting it on one of the major calf muscles of mice. The device did not induce any serious signs of tissue inflammation and damage, and exhibited a mechanical strain of about 15% on muscles, which matches their natural deformation during exercise. 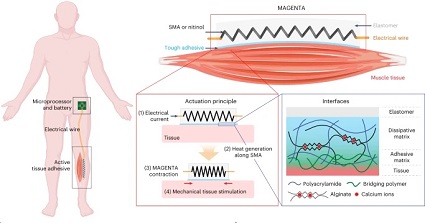 This illustration explains the MAGENTA concept developed by Nam and Mooney. The view zooms from the device implanted in a future patient (left) into a muscle to which it adheres (top right), and where it does its work of extending and contracting the muscle along its length (bottom middle), all the way down to the multifunctional material’s composition and interface with muscle tissue (bottom right). (Credit: Wyss Institute at Harvard University)

In a previous study, Mooney's group, in collaboration with Conor Walsh, Paul A. Maeder Professor of Engineering and Applied Sciences, found that regulated cyclical compression (as opposed to stretching and contraction) of acutely injured muscles, using a different soft robotic device, reduced inflammation and enabled the repair of muscle fibers in acutely injured muscle. In the new study, Mooney's team asked whether those compressive forces could also protect from muscle atrophy. However, when they directly compared muscle compression via the previous device to muscle stretching and contraction via the MAGENTA device, only the latter had clear therapeutic effects in the mouse atrophy model. "There is a good chance that distinct soft robotic approaches with their unique effects on muscle tissue could open up disease or injury-specific mechano-therapeutic avenues," said Mooney.

To further expand the possibilities of MAGENTA, the team explored whether the SMA spring could also be actuated by laser light, which would make the approach essentially wireless, broadening its therapeutic usefulness. The researchers demonstrated that an implanted MAGENTA device without any electric wires could function as a light-responsive actuator and deform muscle tissue when irradiated with laser light through the overlying skin layer. While laser actuation did not achieve the same frequencies as electrical actuation, and especially fat tissue seemed to absorb some laser light, the researchers think that the demonstrated light sensitivity and performance of the device could be further improved. "The general capabilities of MAGENTA and fact that its assembly can be easily scaled from millimeters to several centimeters could make it interesting as a central piece of future mechanotherapy not only to treat atrophy, but perhaps also to accelerate regeneration in the skin, heart, and other places that might benefit from this form of mechanotransduction," said first author and Wyss Technology Development Fellow Sungmin Nam.

Other authors on the study are Bo Ri Seo, Alexander Najibi, and Stephanie McNamara from Mooney's group at SEAS and the Wyss Institute.