Changing the intrinsic behavior of neurons 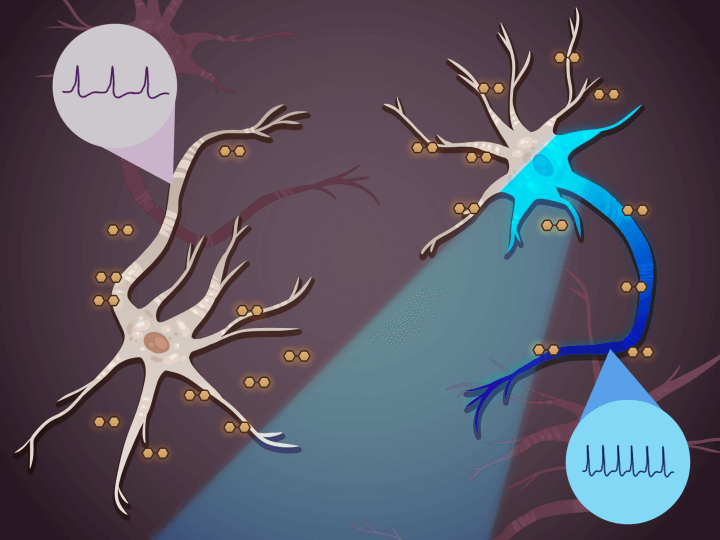 Researchers developed a method to target specific neurons and change their excitability with light for long periods of time. (Credit: Emma Hsiao/Harvard SEAS)

Researchers from the Harvard John A. Paulson School of Engineering and Applied Sciences (SEAS) and MIT have developed a new method to target diseased neurons in the brain and change their long-term behavior using light, paving the way for potential new treatments for neurological conditions such as epilepsy and autism.

The research is published in Science Advances.

"We envision that this technology will provide new opportunities for high spatiotemporal resolution control of neurons for neuroscience and behavior studies and develop new treatments for neurological disorders," said Jia Liu, Assistant Professor of Bioengineering at SEAS and co-senior author of the study.

Optogenetics, the use of light to either stimulate or inhibit neurons, has long promised to revolutionize the study and treatment of neurological conditions that are caused by the over or under excitability of neurons. However, current optogenetic techniques can only change neuronal excitability in the short-term. Once the light turns off, the neurons go back to their original behavior.

Recent advances in nanotechnology, including the flexible, implantable nanoelectronics pioneered by Liu and his team, could potentially alter neuronal behavior in the long term, but these devices need to be implanted into the brain and can't be programmed to target specific neurons involved in disease.

A neuron's excitability is governed by two main components—its ion channel conductivity and the cell membrane's ability to store an electric charge, known as its capacitance.

To change the capacitance of the cell membrane, Liu, in collaboration with Xiao Wang, the Thomas D. and Virginia Cabot Assistant Professor of Chemistry at MIT, used light-sensitive enzymes that can trigger the formation of either insulating or conductive polymers on the surface of cell membranes.

The enzymes can be engineered to target the cell membranes of specific neurons. Once the enzymes attached to the specified membrane, the researchers used blue wavelength light to illuminate the neurons, triggering the generation of either insulating or conductive coatings on the membrane within minutes. They demonstrated that neurons with insulating polymer coatings became more excitable and those with conductive polymer coatings became less excitable.

The researchers found that they could tune the excitability by tuning the exposure to light—the longer the neurons were exposed to light, the more insulating or conductive the coatings became. The research team also showed that the changes in excitability lasted for up to three days — as long as they could keep the neurons alive in a petri dish.

Next, the team aims to test the approach using slices of brain tissue and in animals.

"The overarching goal of this work is to enable paradigm-shift approaches for the integration of functional materials, structures, and devices into living nervous systems with subcellular- and cell-type-specificity, which will allow for the precise manipulation of subcellular electrochemical properties, remodeling the excitability of neurons in living nervous systems," said Liu.

It was supported in part by the Air Force Office of Scientific Research Young Investigator Program under grant FA9550-22-1-0228, the NSF-MRSEC grant DMR-2011754, and the Harvard Dean's Competitive Fund for Promising Scholarship.