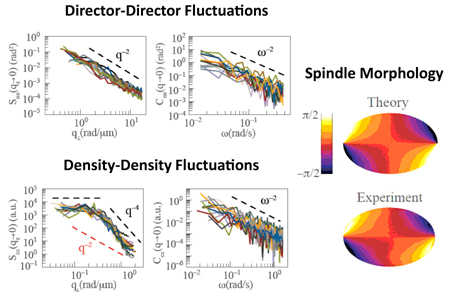 Needleman and coworkers found that active-liquid-crystal theories produced remarkably accurate predictions of the behaviors of metaphase spindles in their recent experimental studies. Using polarized light microscopy, 3D spinning disk confocal microscopy, and microrheology, they measured the wavelength and frequency dependence of density-density, director-director, density-director, and stress-stress correlation functions in metaphase spindles (above) and found quantitative agreement with theory, both validating the theory and allowing the parameters of the theory to be determined. Their results show that, despite the nonequilibrium nature of spindles, their behavior can be quantitatively described by theory. This is the first example of an experimental system that is amenable to description by the theories.