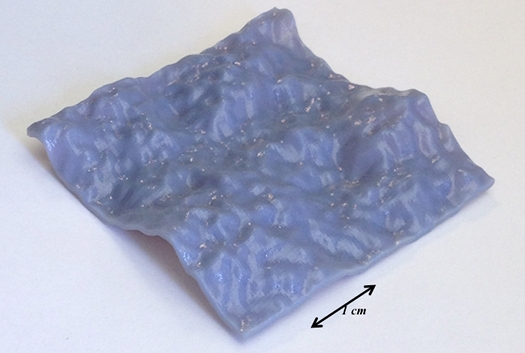 While a flat piece of paper is almost impossible to stretch or shear, a flattened piece of crumpled paper can be easily stretched and sheared. By contrast, the crumpled paper is much harder to bend, as can be observed from the response to gravity upon supporting it at only one end. Using techniques imported from statistical mechanics, Nelson and coworkers have studied a simplified model of the altered mechanical properties caused by thermal fluctuations superimposed on the frozen background geometry that characterizes such situations. The result of these two effects is a dramatic scale-dependence of the elastic parameters, with a pronounced stiffening of the bending rigidity and a softening of the Young's modulus at long wavelengths. Photograph at the top depicts a warped membrane prepared in collaboration with the Lewis group using a 3D printer to encode power-law correlations into a preferred undulating height profile. It is easier to stretch, compress, or shear such objects than a flat, unwarped counterpart without thermal fluctuations.