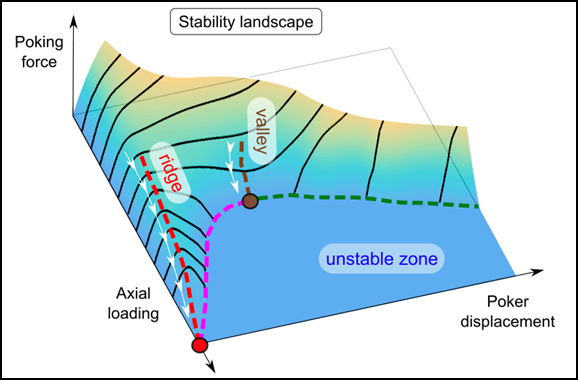 Crushing a soda can from top to bottom is easier if it is dented initially on the side. Predicting the force needed to crush a dented can, however, which is of critical importance for structural reliance of materials engineering is quite challenging.

A team at the Harvard MRSEC led by Rubinstein, Hutchinson, and Brenner investigated the crumpling of soda cans by controlling the denting and applied force until they buckled with a loud snap.

Through their systematic study of the axial denting and applied forces, they were able to map out a "stability landscape," to understand the conditions where shell cylinders will buckle from instabilities. Because of the sudden-onset effect they were able to predict the response from soda cans to a more general universal behavior for cylindrical objects. Thus, researchers can use this stability map to predict the strength of a space rocket or other similar objects to a gentle poke from the side (adapted from Katherine Wright, contributing editor for Physics).

From soda cans to aerospace engineering, the need of high-fidelity estimates of the buckling loads of shell structures is of critical importance for reliance or to increase payload capability (top). Past experimental tests with cylindrical shells have suggested that defects strongly reduce the buckling resistance of thin-walled structures, thus, predicting the critical buckling loads is very challenging.

A team at the Harvard MRSEC led by Rubinstein, Hutchinson, and Brenner investigated the response and stability of cans when subjected to lateral poking with a point probe. The force-displacement curves of the probe at different axial loads unveil a rich landscape in the three-dimensional phase space spanned by axial load, poker displacement and poker force. This landscape fully characterizes the stability of perfect shells and imperfect ones in the case where a single defect dominates. Tracking ridges and valleys of this landscape defines a natural phase-space coordinates for describing the stability of shells.