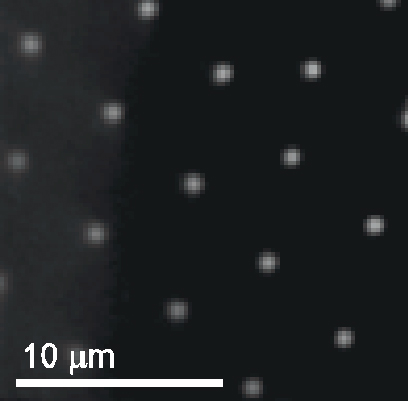 Brenner and Weitz have collaborated to determine the origin of interactions between colloidal particles at interfaces between oil and water. Since the particles are partially immersed in the water, they acquire a charge, resulting in a repulsive interaction. However, because there is no charge in the oil, charged ions also collect at the interface. These ions distort the surface, leading to a capillary attraction, similar to the interaction that causes breakfast cereal to collect together on the surface of milk. The combination of the attractive and repulsive interactions lead to a structuring of the particles on the surface, as shown by the micrograph in the figure. This attractive interaction has been frequently reported in many systems, but has never been explained. Similar behavior is likely to occur in many other materials, and may even help explain ordering of proteins on cells.