Crawling of C. Elegans
How a Worm's Motion Leads to Fundamental Understanding at the Interface of Biomechanics and Neuroscience 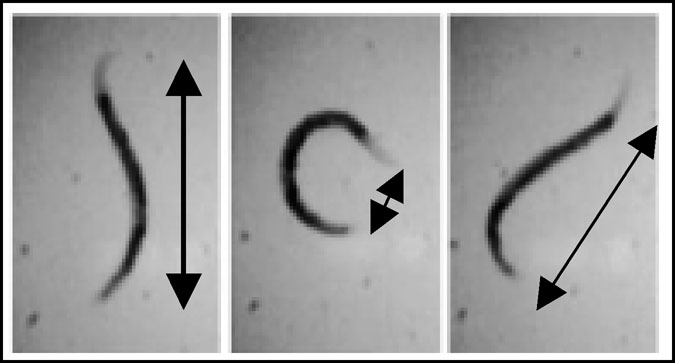 The nematode C-elegans is a powerful model organism for studying the genetic basis of behavior. Samuel is now developing the worm's potential as an equally powerful model at the intersection of biomechanics and behavioral neuroscience. The worm lives in the soil, and faces a range of mechanical problems in its everyday existence. Navigation through the complex and heterogeneous environment of its wet soil habitat must require sophisticated solutions hard-wired into the structure and function of worm neurons and muscles. Samuel discovered a new worm behavior called barotaxis: the response and motion of a worm to changes in hydrostative pressure. With Mahdevan, he is now investigating the motion of the worm when driven by barotaxis. The worm is capable of swimming in liquid or crawling on soft surfaces with sinusoidal movements, as shown in the pictures. How does the worm coordinate the rhythm of these oscillations for optimal gait depending on environmental mechanics? Does the worm purposefully navigate environments for suitable mechanical properties? The answers to these questions will provide key insight into the nature of the complex motion of the worm, and will serve as a model in the development of smart materials that can mimic the motion of the worm.