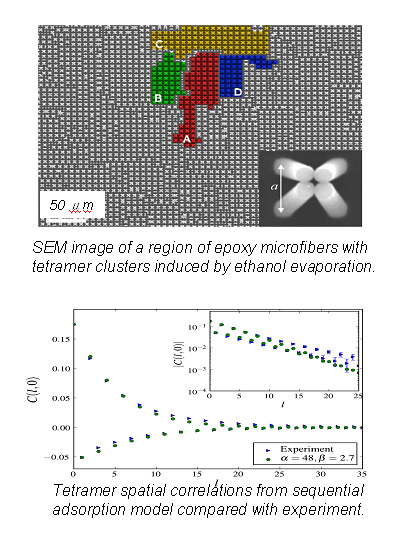 Capillary-mediated self-assembly and self-organization are useful techniques for constructing ordered superstructures from nanoscale and microscale building blocks. Square arrays of flexible microfibers attached to a substrate have been shown to form highly ordered patterns of 2 × 2 fiber clusters (tetramers) under the influence of capillary forces at the surface of an evaporating liquid layer. We model this pattern formation as an irreversible sequential adsorption process on a square lattice, in which tetramers form sequentially on an initially empty lattice and locally enhance the formation of nearby tetramers, giving rise to partially ordered domains. Restrictions analogous to excluded volume interactions for hard squares prevent additional tetramers forming at next-and second-neighbor positions. Two parameters regulate the enhancement in tetramer formation at third- and fourth-near neighbor positions. We study the model using numerical simulations and compare it to a realization of a self-organization experiment. The model reproduces many features of the observed patterns when the two parameters are chosen by a least-squares fit to a single experimental quantity. The fourth-near neighbor enhancement, not considered in previously studied sequential adsorption models, is shown to be significant for the pattern formation under study.